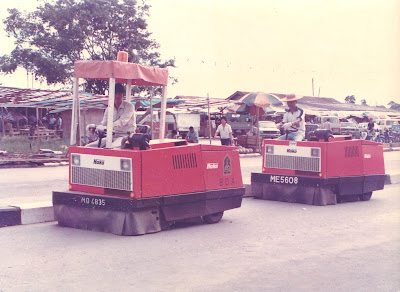 Date taken : circa 1983 -84 ( Colour photo )
In 1984 there was one major squatters demolition and resettlement project undertaken by the BDA with the help of the various government departments in Bintulu town area. In 1984 the the whole squatters area was cleaned up. The above picture depicts the seriousness of the squatters problems in Bintulu as even within the center of the Bintulu town the squatters had built their colony. It was evident that the rapid migration of temporary construction workers among the local Sarawakians looking for jobs in Bintulu were not met with sufficient affordable housing for many jobless Sarawakians. Thus they had no choice but to build up camp amidst the burgeoning squatters colony. Somewhere towards the upper right of the picture is seen the pitched roof of the old fish market ( behind the big umbrella). The Main Bazaar road during those time was a two-way street. The use of mechanised sweeper was a novelty among the local authorities in Sarawak. Bintulu was one of those local authorities that pride in having them to clean the streets daily. 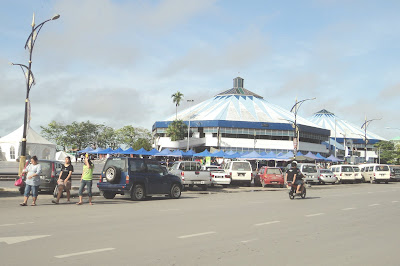 Date taken : 29 Dec'10 ( Digital - Sony Cyber-shot)
In place of the old fish market rises a twin main market building called " Pasar Utama" in Malay. The architecture of the market was inspired from the local Melanau sun-hat called the "Terendak". The Main Bazaar road now functions as a four-lane one way street with ample car parking spaces on both sides. Towards the left of the picture is partly seen a large open space for public activities. With the re-development of the squatters area, Bintulu had shed its image as a dirty cowboy town of the 80's.
Posted by Mahmud Yussop at 9:36 PM No comments: 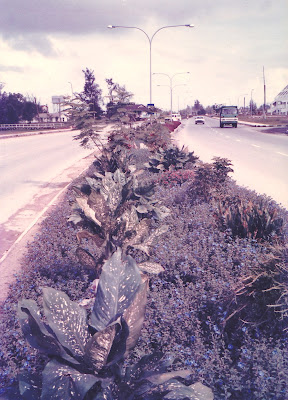 In the early 1980's the Public Works Department initiated a dual-carriageway road to connect Bintulu town to its newly opened sub-urban towns ( satellite towns ) especially the Kidurong township and the heavy industrialised zone of Kidurong, some 24 kilometers away from the Bintulu town . The funds were available through Federal funding. The start of the Federal road from Bintulu town was popularly called M O ( Mile zero). This view above shows the road from M O leading out of town towards the first roundabout which is today turned into a traffic lights junction. On the left of the picture is shown white railings that are placed on both sides of the wooden bridge that lead to the small Bintulu hospital then. In the picture a car takes a turn at the road junction to enter the Bintulu hospital area. On the right, the BDA-Shahida commercial center is under construction. In the early years of 1980's the local authority have just started to implement roadside planting. The above shows a brave attempt despite the lack of planting materials. But what was evident was the spirit of cooperation and togetherness between government departments there. The local authority proceeded to undertake the roadside tree planting using its own funds and this also covered its maintenance. The spirit was to make Bintulu a welcoming and beautiful town and it did not matter whether the PWD got the funds or not. The local authority was willing to chip in. 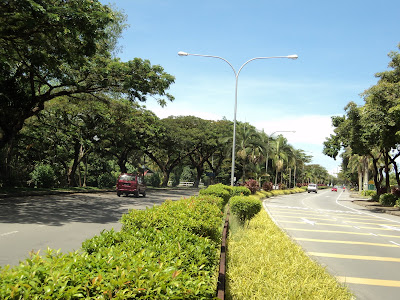 ... approximately 20 years later ( date taken 25 Nov'10)
Today , roadside trees adorn the dual-carriageway to provide much needed shade and beautification to the town roads. On the left are Rain trees (Samanea saman ) and on the right are the Cabbage trees or sometimes called the Brown heart (Andira inermis ) . The narrow central median is planted with bright yellow Dwarf Pandanus ( Pandanus pygmaeus) as cover plants and sculptured shrubs of the Eugenia oleina interspersed with bright red foliage of the Red Ti ( Coryline terminalis ). The central median planting is topped with the Majestic Palm ( Archontophoenix alexandrae). The white railings are still there but the former hospital has been moved out of town to Nyabau Road, a distance of about 10 kilometers from Bintulu town. Soon this road will be joined by another road ( under construction) from St.Anthony's School to meet at Somerville Road thus providing another short-cut to town. The above picture shows clearly how Bintulu stands apart from other towns in Sarawak because of its early emphasis on town beautification programmes especially roadside landscaping.
Posted by Mahmud Yussop at 3:01 AM No comments: 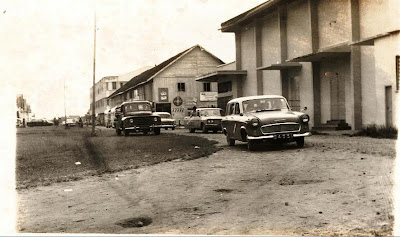 Date taken : circa late 1950's ( B&W photo)
As a young kid and adult growing in Bintulu I have seen the rise and the fall of the cinema entertainment business here especially those buildings purpose-built to project celluloid films on huge theatre white screens. One such institution was the Sky Theatre of which the building is seen on the right of the picture above. The space between the theatre and the wooden shophouses have been taken up by the Hoover Hotel as shown below. The wooden shophouses are gone now. The main road that is seen above is the Keppel Road and is not yet well-paved. Cars are very few indeed and there is ample green space in between the opposite row of wooden shophouses. Life seemed to remain standstill except of course the dramatic experiences shown in the theatre. I have my share of attending films ( including cheap Sunday matinees), acrobatic shows, magic shows, concerts and singing competitions organised in the theatre. The Sky Theatre was owned by a local businessman named Yek Min Ek and was opened for business in the 1950's. The theatre survived for 40 years but with the advent of television in the 1970's and video tapes in the 1980's, the cinema business suffered badly and the theatre met its natural death in the 1990's. 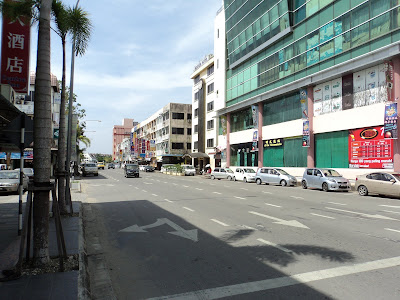 Date taken : 2 Dec'10 ( Digital - Sony cyber-shot)
The original site of the Sky Theatre now houses the 'City Point' building which is owned by the Hock Lee group a company started by Yek Min Ek. In the building there are cineplexes as a sign of continuity in the cinema business and still having popular audience. The wooden shophouses are replaced by permanent ones. The Keppel road now enjoys trappings of modernism like bituminous or tar-sealed road. To encourage smooth traffic flow the local authority decided to make the Kepppel Road a one-way four-lane street complete with traffic lights, pedestrain crossing, tiled street pavements, underground cables for the lamp posts and landscaping.
Posted by Mahmud Yussop at 10:53 PM No comments: 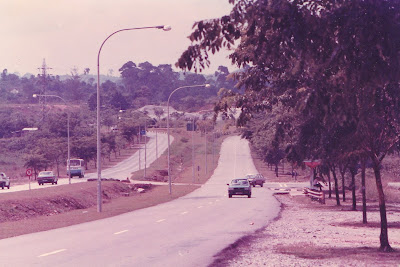 Date taken : circa early 1980's ( colour photo)
Almost every single visitor in Bintulu in the 1980's right on till the early 2000 will notice this dual carriage highway. The incoming car on the right shows the road going north to the newly-opened up areas of Tanjung Kidurong which was the centre of physical and economic activities in early 1980's with the construction of three massive projects viz the Bintulu Port , the Malaysia Liquefied Natural Gas Plant (MLNG) and the ASEAN Bintulu Fertiliser Plant (ABF). These three major economic generator projects created the first boom in Bintulu. The road was like the above through three booms. But beginning last year the road was extensively re-designed from the roundabout to the junction near the Bintulu Divisional Mosque called Masjid Assyakirrin. The popular Angsana trees were planted on both sides of the highway from stumps and still looked lower than the electrical posts. 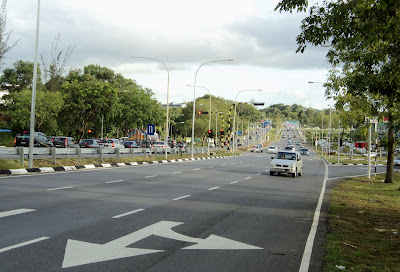 Date taken : 12 Dec'2010 ( Digital - Sony Cyber-shot)
Today, at the far end of the picture the former roundabout has become a traffic light junction. The dual- carriageway from the traffic junction to the Mosque junction has been altered to become a three-lane carriage way and the Mosque junction fitted with traffic lights thus making the central median narrower. Obviously the number of cars have more than quadrupled over the years. The trees have also over-topped the electrical posts. Today Bintulu is in the fourth boom era and the momentum that has developed over three decades of growth has made it able to ride the fourth boom with greater preparedness and gear itself to become an industrialised city by 2020. However, by all practical purposes it is now already an industrialised town but not given any city status just yet.
Posted by Mahmud Yussop at 7:30 PM No comments: 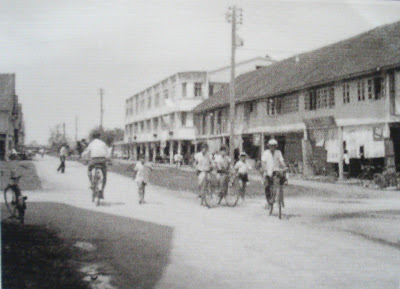 Date taken : circa early 1970's ( B&W photo)
The picture above shows Keppel Road when bicycles were king of the road. In the early 1970's cars were very rarely seen around town. The Keppel Road then was a two - way street with ample green space in between. The row of concrete buildings at the far right background was one of the few permanent- type buildings seen in the 1970's. Two institutions important at that time that were housed in the block were the Standard Chartered bank and the Capitol Hotel. The Capitol Hotel occupies the corner lot of the block and still exists today but re-named as Capitol Inn. Note the wooden shophouses on both sides of the road built primarily of 'belian' posts and roofing of 'belian' shingles. The first floor of the shophouses were normally made into residences by the shop owners. The ground floor of the shophouses however were of concrete flooring. The electrical posts in the center of the road were also of 'belian' timber - the hardest wood in Sarawak. 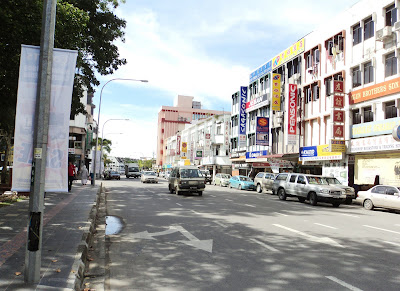 Date taken : 2 Dec'10 ( Digital - Sony Cyber-shot)
Today, Keppel Road is a one-way 3-lane road with ample parking spaces infront of the shophouses but charges are imposed by the local authority at the rate of 20 'sen' ( cents) per first 30 minutes and gradually increases thereafter. The two-storey wooden shophouses when re-built were increased to four storeys high. The tallest building at the far right was built over a previously empty open space and now houses the 'Kintown Inn'.
Posted by Mahmud Yussop at 3:20 AM No comments: 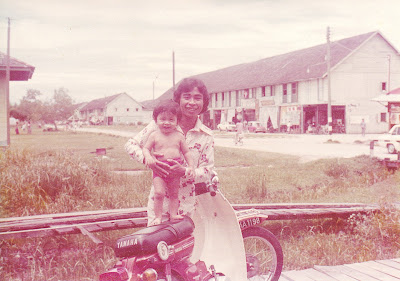 Date taken : 1975 ( Colour Photo)
View of Bintulu town shophouses along Main Bazaar road
In 1975 the shophouses that lined the Main Bazaar Road were of wooden structures with concrete floors. Almost all of the shopowners stay on the first floor. The posts of the buildings were of 'belian' timber just like the electrical posts across the street. The roofing material was of 'belian' shingles. Cars were few and bicycles were king of the road. Most villagers from the Malay kampungs closeby normally walk to town. The wooden belian bridge on the right of the picture connects the village road called ' Jalan Masjid' to the Main Bazaar road. The wooden building partly seen to the left was the 'Native Rest House' to accomodate rural natives who need to stay in town for the night while visiting the hospitals, government offices, schools, court cases, shopping for provisions, trading jungle produce products etc.,. In 1975 the Main Bazaar road was a two-way street with open space in between. In the above picture I'm with my nephew striking a pose next to my newly bought Yamaha motorcycle in front of our house. 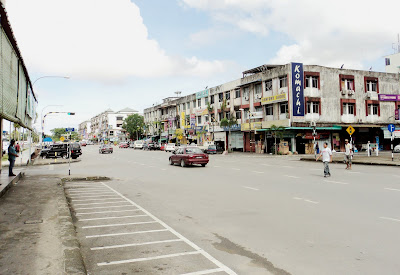 Today the Main Bazzar Road and the Jalan Masjid are a one-way tar-sealed four-lane roads . Much have changed but the orientation and sub-division of the shophouses have not.
Posted by Mahmud Yussop at 10:25 PM No comments: